It's Monday What are you Reading... For Your Tomorrow... 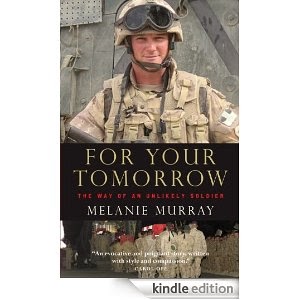 It high time I let you know what one of the best books I've read this year was all about.  For Your Tomorrow, is a beautifully written Non fiction account of a young man who gave his life for his country and humanity.

The story line jumps between Canada, and Afghanistan. A beautifully written account of a young man who struggles with his decisions of career until he finds his "calling".  Feeling his duty to humanity so strongly that he gives his life.  This is the story of before and the after of that wonderful life.

The only problem I found reading this book was the constant need for tissues.  As I tend to read on public transit, this is a difficult thing to do, I found other passengers deeply affected by my weeping, some would write down the title, others would change seats.  I finished this book many weeks ago, but just couldn't write the review.  I don't like to read non-fiction.  Lets face it I like to pretend, but this was outstanding.  I ordered this book when it was first released, and then my son joined the army.  You can understand why it sat on my bookshelf.  My son has now moved on into another area.  I cannot imagine the feelings of those left behind.

Product description:
What compels a young, affluent Canadian to put on a uniform and risk his life for the controversial mission in Afghanistan? And how does his family cope with his loss when he is killed there? Jeff Francis was a thirty-year-old doctoral candidate and student of Buddhism when he decided that joining the armed forces was the best way to make a difference in the world. In elegant, spare prose that captures both the hardness of war and the nuances of a grieving family, Melanie Murray - Captain Francis's aunt - uses the lens of his life and death to give Canada's war in Afghanistan the perceptive, literary treatment its soldiers, families and citizens deserve.

I read this book as part of my War Through the Generations Challenge.  While this is not the Iraqi War/Gulf Wars, I felt I needed to be true to my Canadian self and my countries involvement in these wars.

Email ThisBlogThis!Share to TwitterShare to FacebookShare to Pinterest
Labels: books read in 2014, buy one book and read it, Canadian Authors, new author 2014, non fiction., War through the generations 2014

This sounds sad but really good all at the same time.

So glad that you found a book for the first war in the challenge list. I hope you'll find some others as well. I'm going to compile a list of recommended books for these wars over the course of the year. thanks for adding your link to the linky as well.

Whew, Irene. I can understand your not wanting to read this for a long while. Very emotional, for all the reasons you mentioned!

This sounds like something my TG would enjoy reading. Thanks for that heartfelt review, dear Irene.

I wouldn't have read it for a while either, it does sounds like a book that will stay with you for a long time!

I would've have been sobbing on public transit, too! It does sound like a very good book, even if you have to keep tissues with you at all times. Thank you so much for sharing.