Enemy Women and a reading challenge I couldn't resist... 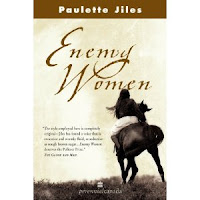 I don't do well with read -alongs.  I've never really "talked" books well, or at least with adults.  When my boys were young we would talk about the books we read together, just because I was a "reader" for the library and they were my test audience.  It became part of our routine.  But with adults... not so easily.  So when I surprised myself by joining the Civil War read- along and began reading Enemy Women, Paulette Jiles I immediately felt like I was going to say things that were not politically correct, I do those kinds of things.

Enemy Women is the story of a young woman who's father was taken by the Militia during the Civil War.  Their home was burned down, their father beaten in front of her and her young sisters.  She gathers up her family and tries to find her father.  She is arrested for , I'm going to say, talking too much.  Whilst in prison, she falls in love with the Major in charge of  her case.  He then helps her escape.  He is reassigned and goes through some horrible war times which leave him injured.  Wisely he arranges for himself a furlough and heads out to find Adair.   I found the horrors of war very vivid.  But then again all I know of the Civil War I learned from Gone With the Wind.

All in all I enjoyed this book, I loved the relationship with horses Adair had.  I was so very sorry that the war robbed her of her health, wealth and happiness.

I read this book as part of the War Through the Generations read a long.  Considering that I've only read one book this month, my house should be spotless, it's not.  Now that I've gotten it to the presentable stage I'd just like to sit down this weekend and read, but not so handy Andy just spilled a whole container of parmesan cheese, and you know if I make him clean it up I'll have to repaint the wall or something equally as drastic.

Never heard of this book. Sounds like a fascinating read and someone I could relate too. I've always been accused of talking too much. Thanks for bringing this to my attention :)

I'm so glad you joined us for the read-along and decided to chat with us about the book. It was a pleasure reading your thoughts, and I'm glad that even though some of us didn't like the book a whole lot that you were able to enjoy it. We host a read-along every year, and hope you will join us again. I've linked your post on the Civil War book reviews page.

Your review will be featured on the main page of War Through the Generations on Oct. 21.